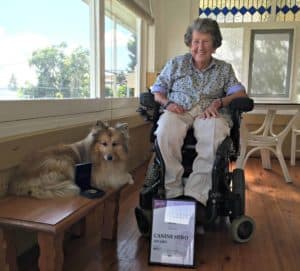 Former Paralympian Charlene Meade is one of the longest living paraplegics from trauma at 84 years old.  Charlene is also a big dog sports enthusiast and has won awards for agility competitions.

Charlene lives independently with her two dogs and one cat. She’s proof that being in a wheel chair is no barrier to looking after pets.

Charlene found competition sport helped her with rehabilitation. In the early 1960s, Charlene competed in the first International Paraplegic Games (now known as the Paralympics). In later years, Charlene won a silver medal for table tennis at the Stoke Mandeville Hospital Games in Aylesbury Vale, England.  Later on, Charlene took up competition dog obedience and never looked back.  She achieved the high level of Utility Dog in obedience trials.  Charlene says she has been more successful in a wheel chair!

Charlene has dedicated her life to helping others with disabilities.  A few years ago, she was awarded an Order of Australia medal for achievements in rehabilitation and disability access.  Charlene shares her story and a tip about getting a dog for people in a wheel chair.  Charlene reveals who’s the boss in her household…you may be surprised!

Who’s the boss? Did you have pets growing up?

Charlene: As a little girl I was frightened of dogs.  So, mum decided the best way to get over being frightened was to get a puppy. At six or seven I got a puppy called Jimmy. I’ve had a dog most of my life. There was a period of 12 years when I didn’t have a dog – from the time I had my horse riding accident at 14 years old until after I got married and had our two children. We went to the RSPCA to get a dog and came home with Benji, a Corgi cross.

Who’s the boss? When did you fall in love with Shetland Sheepdogs (Sheltie)?

Charlene: Up until my accident I always said I wanted to be Vet and have a Collie dog. That changed when I had to be in a wheel chair after my accident.  There was no rehabilitation in those days.  I had to sit in a big wooden and cane wheel chair which was very awkward to manoeuvre. I realised then that a Collie dog would be too big for me.

I used to love the Royal Easter Show in Sydney and I still do.  When I was 16, I was taken to the Easter Show. That’s when I saw the Shetland sheepdogs.  It was love at first sight.  I thought I’m going to get one of those!

By the time I was around 30, I decided to get a Sheltie for the family. My husband, Eric and our children didn’t mind. I got a puppy with white collar marking from a breeder.  He needed a lot brushing!

Who’s the boss? Tell us about your Shelties Brook and Piper, and Meggsie the cat (commonly called Puss).

Charlene: Brook was a Show dog before we got her when she was two.  She is now 11 years old.  Brook instinctively knows when I need help. A couple of years ago, I was stranded in Centennial Park, (Sydney) when my wheelchair got stuck. Brook started barking and didn’t stop until she got help.  She was presented with a 2016 Canine Hero Award at the Sydney Royal Easter Show by the Governor General Sir Peter Cosgrove.

Piper is four years old.  I like having two dogs because they keep each other company when I go out.  Brook has been through three other dogs before Piper came along.  Piper came from New Zealand.  Piper has a tooth that sticks out, which meant he was out of the show ring.  He is a lovely, affectionate dog but he doesn’t like doing competition obedience.

The dogs love the cat. Puss was seven when Piper arrived. Puss set Piper straight not long after he arrived as a puppy.  Puss will tell the dogs where to get off. He was stand offish with me but a year or two I started cuddling him before I feed him.  Now he waits for his cuddle before he gets his dinner.

Who’s the boss? How did you get into dog sports?

Charlene: I fell into dog sports by accident.  A friend suggested to me that I should meet the daughter of her friend who was in a wheel chair.  The daughter told me she took her Pekinese dog to dog training.  So I went to a dog training club at Lindfield (Sydney) and before I knew it I was signed up!  In those days, the only dog Trials for cross breeds were the RSPCA Trials.  They had a Trial only every three months. Benji did well for a few years in dog Trialling. After Benji died, I got a Shelti and entered the pure bred Canine trials.

There are some things I can’t do when it comes to dog sports, for instance, tracking.  I can’t go through the bush in a wheel chair.  I can do agility.

Piper does not like competition obedience.  So, I thought I might try Rally O with Piper. You can talk to your dog all the way around but you can’t in obedience.

Charlene: Puss the cat! It’s always been the cat.  But they live in harmony.  But in a crisis, Brook takes charge.

Who’s the boss? What is your tip about getting a dog for people with disabilities?

I want people to know you can easily live with a dog in a wheel chair.  People say to me ‘they must get under the wheels’. I tell you they don’t. You must be careful with a puppy but they learn quickly and they are very aware of where the wheels are.  I have two dog jumps in the garden here for them to practice their agility jumping. 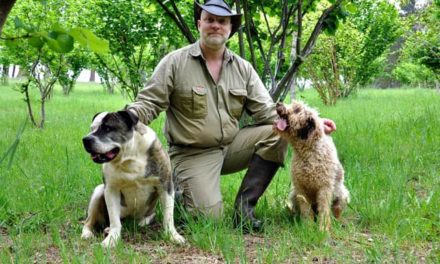 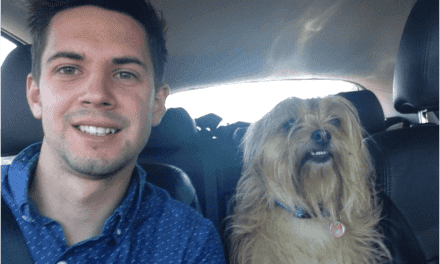 Jake Munday, owner of Dog Lovers with over 4 million Likes! 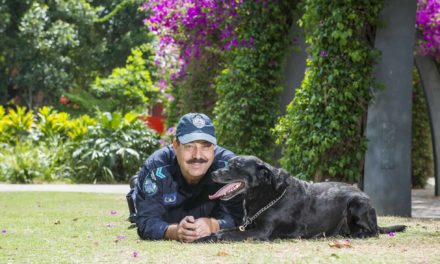 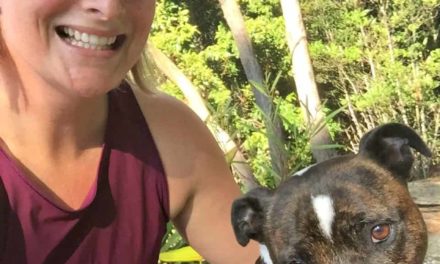