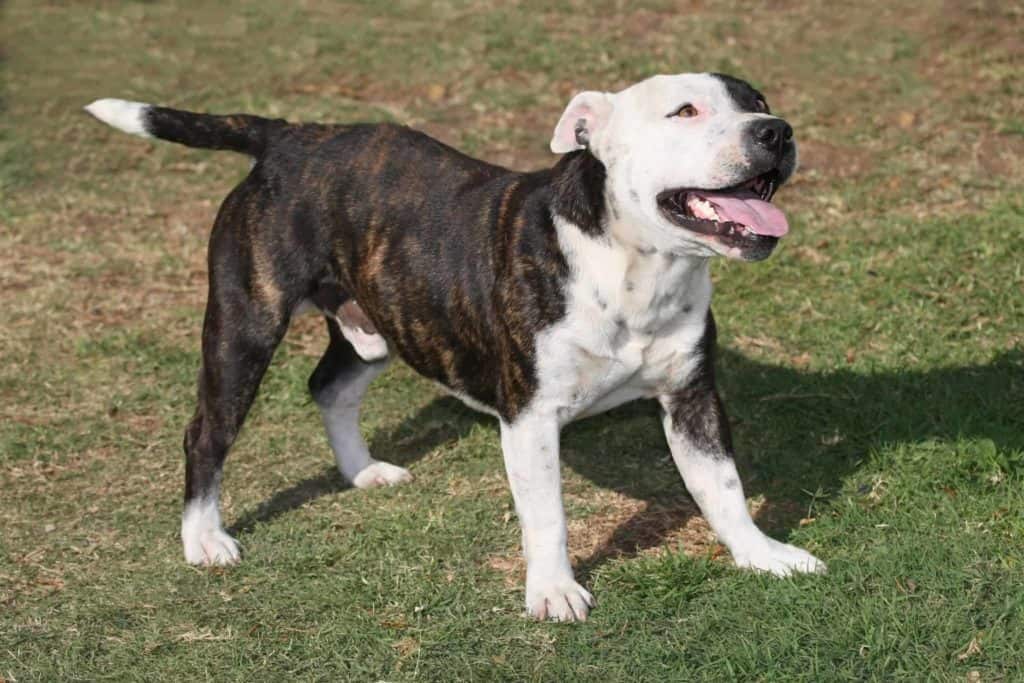 The Staffordshire Bull Terrier is classed as Group 2 (Terriers) by the Australian National Kennel Council (ANKC).

The Staffordshire Bull Terrier got its name from Staffordshire in England. Dog-fighting, as distinct from bull-baiting, began in the early 17th century when royal patronage was withdrawn from baiting, and for the ensuing period of 100 years, the only dogs used for fighting were the Bulldogs of the period which were gradually decreased in size from 90 pounds and over to around 50 pounds.

About the year 1800, an attempt was made to improve the fighting dog by increasing his dash and agility, without in any way sacrificing his courage and tenacity; this was accomplished by crossing the bulldog with the smooth-coated “old English terrier”, now extinct, which was an active dog, quick in its movements, and with all the instincts of the terrier to kill. This cross had the desired effect and from 1800 until 1835, when dog fighting was made illegal, this bull and terrier cross gradually replaced the bulldog as a fighter.

After the Act prohibiting fighting was passed in 1835 dog fighting declined, though it still continued to a lesser degree until a much later date; and in certain districts – notably South Staffordshire (the Black Country) – the breed was extensively bred among the local miners, chain-makers and iron-workers; and generally acquired the name of the Staffordshire Bull Terrier, under which title it was accepted for registration with the Kennel Club in 1935.

The Staffordshire Bull Terrier arrived in Australia in the 1950s and it is now one of the top five most popular breeds in Australia. 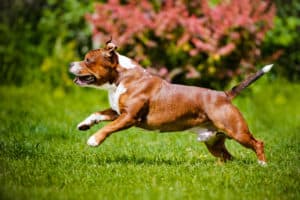 This breed is a strong, robust, muscular medium size dog that measures between 36-41 centimetres height at the shoulder and weighs 13-17kg, females weigh 11-15.4kg.

The breed is described by the ANKC as smooth coated, well balanced, of great strength for his size. Muscular, active and agile.

A Staffordshire Bull Terrier is not generally a barker, but he is definitely vocal. This breed will entertain you with his snorts, snores, grunts, and groans, as well as his singing voice, often described as a yodel.

The Staffordshire Bull Terrier has been described as playful, people orientated, affectionate and even-tempered.  They are generally friendly and good with both children and other animals. This breed has high arousal levels which should be managed during puppyhood.

Diet – How much your adult dog eats depends on his size, age, build, metabolism, and activity level. The quality of dog food you buy also makes a difference–the better the dog food, the further it will go toward nourishing your dog and increase your dog’s longevity.  Discuss with your veterinarian and a responsible breeder about the best diet that is appropriate for this breed’s life stage from puppy to adult to senior. Clean, fresh water should be available at all times.

Grooming – The Stafford’s coat is short and smooth, and needs only a quick brushing once a week. Beyond regular weekly brushing, an occasional bath will keep them clean and look their best. Grooming can be a wonderful bonding experience for you and your pet. Their strong fast-growing nails should be trimmed regularly with a nail clipper or grinder to avoid overgrowth, splitting and cracking. Their ears should be checked regularly to avoid a build-up of wax and debris which can result in an infection. Teeth should be brushed regularly.  Begin accustomising your Staffordshire Bull Terrier to being brushed and examined when he’s a puppy. Gently handle his paws frequently.

Shedding – The Stafford’s coat sheds annually and hair loss is minimal throughout the year.

Exercise and Games – You’ll need to engage his mind with training sessions or fun activities.  Although this dog breed is not high energy, he needs a daily walk or even twice a day. In Summer, make sure your Staffordshire Bull Terrier doesn’t become overheated. They should always be kept on a lead when in a public place.

His powerful jaws will enjoy a supply of strong chew toys and feeding puzzles. This breed would enjoy regular games of tug with you but don’t pull the tug toy out of his mouth, wait until he drops the toy then pick it up and start playing again. Be aware that most Staffords are not good swimmers.

This breed is very trainable. While all dogs benefit from training, considering the Staffordshire Bull Terrier is a boisterous, strong breed it is particularly important your dog is properly trained and using positive reinforcement dog training methods. Start training early! Socialisation with gradual introductions to other dogs and animals is essential.

Dog sports are a great way for you and your dog to exercise and spend time together. Staffordshire Bull Terriers are capable of reaching the highest heights in obedience titles. The Stafford is known to be easy to train and excel at obedience, flyball and agility.

Another way to keep your dog physically and mentally active is to teach your Stafford to learn a few dog tricks.

The expected average lifespan of a Staffordshire Bull Terrier is approximately 12-14 years.

This breed can suffer from epilepsy, cataracts and some pups may be born with soft or cleft palates. All conditions are manageable with medication or surgery.

L-2-HGA (L-2-hydroxyglutaric aciduria) in Staffordshire Bull Terriers is a neurometabolic disorder characterised by elevated levels of L-2-hydroxyglutaric acid in urine, plasma and cerebrospinal fluid.  L-2-HGA affects the central nervous system, with clinical signs usually apparent between 6 months and one year (although they can appear later). Symptoms include epileptic seizures, “wobbly” gait, tremors, muscle stiffness as a result of exercise or excitement and altered behaviour.

HC – Hereditary Cataracts (also called Juvenile Cataracts) Hereditary Cataract in Staffordshire Bull Terriers has been recognised as an inherited condition since the late 1970’s. Affected dogs develop cataracts in both eyes at an early age. The condition is not congenital, so the lenses are normal at birth but cataracts appear at a few weeks to months in age, progressing to total cataract (and resulting blindness) by two to three years of age.

Its short, smooth coat, medium size and even temperament make this breed ideal for a family with children who are old enough to understand how to respect and interact with a strong dog, particularly a breed with powerful jaws. The Staffordshire Bull Terrier is great with kids but can be too enthusiastic and may accidentally knock small children down.

This dog breed wants to be with his family. The Stafford is an inside dog that needs to be a part of the family who will engage him with exercise and games, rather than left outside to its own devices for long periods.

Never leave a puppy or adult dog alone with your child! If you are unable to supervise, then separate your pup and child. Crate training your puppy to give him a safe and fun space to be on his own for short periods is recommended.

More details on the breed