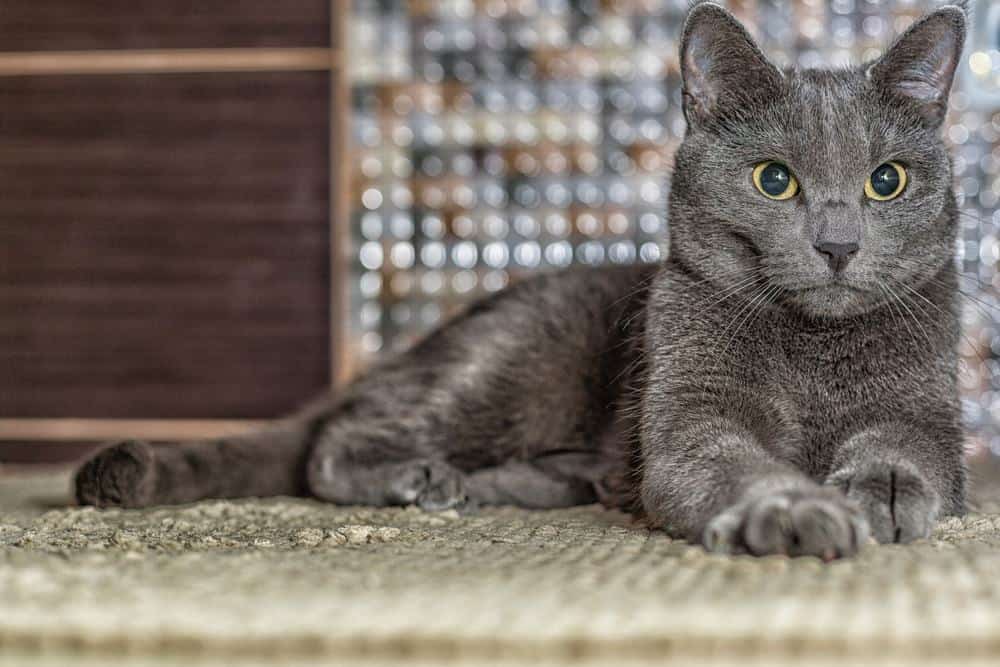 The Russian Blue cat is classed as Group 3 (RUS a) by the Australian Cat Federation (ACF).

The Russian Blue is a naturally occurring breed that may have originated in the port of Arkhangelsk, Russia. They are also sometimes called Archangel Blues. It is believed that sailors took Russian Blues from the Archangel Isles to Great Britain and Northern Europe in the 1860s. The first recorded appearance outside of Russia was in 1875 at the Crystal Palace in England, as the Archangel Cat. The Russian Blue competed in a class including all other blue cats until 1912, when it was given its own class.

The breed was developed mainly in England and Scandinavia until after World War II. Right after the war, a lack of numbers of Russian Blues led to cross breeding with the Siamese. Although Russian Blues were in America before the war, it was not until the post-war period that American breeders created the modern Russian Blue that is seen in the US today. This was done by combining the bloodlines of both the Scandinavian and British Russian Blues. The Siamese traits have now largely been bred out. The short hair and slate-grey/blue colour are often seen in mixed-breed cats, which can affect breeders and showers due to mislabeling a cat as a Russian Blue.

The Russian Blue cat is a robust breed, with firm muscles and an overall dose of good looks. It is physically in the same class as the Korat and Oriental Shorthair — long, slender, elegant. It is a medium size, and muscular, but compared to a swimmer in the compactness of its musculature. When it is in full motion and stretched out, one can see that it has a long, graceful neck, but the neck is hidden by thick fur and high set shoulder blades when the cat is sitting, making it look as though it has a short, thick neck.

The Russian Blue appears bigger than it actually is because of its double coat, which is the most eye-catching feature of this breed. Dense, silky, and plush, the hair stands out at a 45-degree angle, allowing you to literally trace patterns into it, where they will remain until you smooth your hand over them. According to some legends, the Russian Blue was at one time the target of hunters, who likened their luxuriant fur to the fur of seals. The coat is bright blue, preferably lavender at the base (root), darkening along the shaft up to the tips of the guard hairs (protective hairs in the topcoat), which are tipped in silver. The coat shimmers with reflective light.

Adding to the captivating physical qualities of this breed is the eye colour. The eyes are yellow while the Russian Blue is a kitten, and by four months there is a bright green ring around the pupil. As the cat matures, the eye colour graduates into a bright, vivid green, aesthetically intensifying the already remarkable blue-silver colouring of the cat. The eyes are wide set and round, and only slightly slanted at the upper corners, giving the Russian Blue a sweet expression that matches well with its gentle temperament.

One of the more curious and amusing features of the Russian Blue is its “smile.” It has a slightly upturned mouth, which is frequently compared to the enigmatic Mona Lisa smile.

The Russian blue is a medium sized cat, with an average weight of between 3 ½ to 7 kgs. The male Russian Blues Blues are generally larger than females but besides that, they usually look similar.

People don’t just love these cats because of their appearance and royal background, however. They have also been widely known to score high in intelligence and have vibrant personalities. The Russian Blue usually forms a strong bond with their owner and commonly shows displays of affection with those it is familiar with. They aren’t an overly hyperactive breed but they have been known to be very playful. They get along well with other cats and are usually pretty good with children and strangers in the house. Since they are so smart, they usually pick up things easily and have even been known to play fetch with their owners.

They do have some difficulties as well, Russian blues won’t even think about getting in their litter box if it is dirty, so this is something you should keep in mind. They also tend to startle very easily and it is not uncommon to hide if you have guests in the house. If they do appear they will be very shy. Since they are very playful and affectionate sometimes might demand more attention than what you are able to give. If you ignore or neglect them in such cases they might be hurt emotionally, so try to schedule some time with them.

These cats are also known for their ability to sympathize human emotions and trying to cheer you up if you are in a blue mood. Affectionate, empathetic but restrained and independent at the same time, it is no surprise that so many stories are being told about these cats and that so many royal families wanted to have one as a pet.

Diet – As with many breeds of cats, the Russian blue cat can eat numerous types of homemade meals. It is imperative that they consume protein as this ancient breed would eat its prey. They are able to eat chicken, turkey, fish, and other types of seafood.

There is no need to create a specific homemade cat food recipe for your Russian blue cat as they love eating protein they way you do. They enjoy different flavours and not repeating the same meal over and over again. This is also a good opportunity to feed it wet food, which is what they generally prefer to consume and what they tend to eat the most. On top of that, these wet foods provide an extra form of water intake which is extremely important for the Russian blue cat breed. The reason for this is due to the fact that Russian blue cats are susceptible to polycystic kidney disease. As a result, many veterinarians recommend that a typical Russian blue cat diet plan include roughly 80% wet or moist food, as opposed to generic dry food.

It is important to bear in mind that Russian Blues has a number of allergies and intolerances to certain food types. These include soy, corn, dairy and gluten. As always, check with the vet for the nutritional requiremens for this cat breed.

Grooming – You will have to brush and comb your Russian Blue three times a week, always depending on the season and lifestyle (indoor vs outdoor) of your cat.  Trim the nails as needed and brush the teeth with a vet-approved pet toothpaste for good overall health and fresh breath.

Shedding – Russian blues are known for their beautiful double coat and the hypo-allergenic nature. But where they stand when it comes to shedding? Actually, they are not very different from other breeds. If you want to keep their fur shiny, regular grooming is needed.

Some owners report heavy shedding of their Russian, this is usually not to the nature of the breed but rather because of poor diet and lifestyle. Diet is very important when it comes to shedding. A poor diet can easily lead to heavy shedding in every cat, not only Russian blues. Try shifting to a different diet with the help of your vet. Outdoor cats also tend to shed more, keeping your cat indoors will also help. Last but not least you should alter your cat if you haven’t done this already. Altered cats tend to shed less.

The Russian is a healthy hearty breed known to live into their mid to late teens given the right environment and nutrition.  However, these cats are susceptible to polycystic kidney disease.

An owner’s main concern will probably be this cat’s hearty Russian appetite, which can turn him from sleek to stout in no time.

Talk to a veterinarian about health issues for this cat breed.

Always supervise interaction between a young child or other animals and your new kitten/adult cat!  Find out more about creating smooth introductions in our Paw Perfect Introductions podcast with renowned animal behaviourist Dr Joanne Righetti.