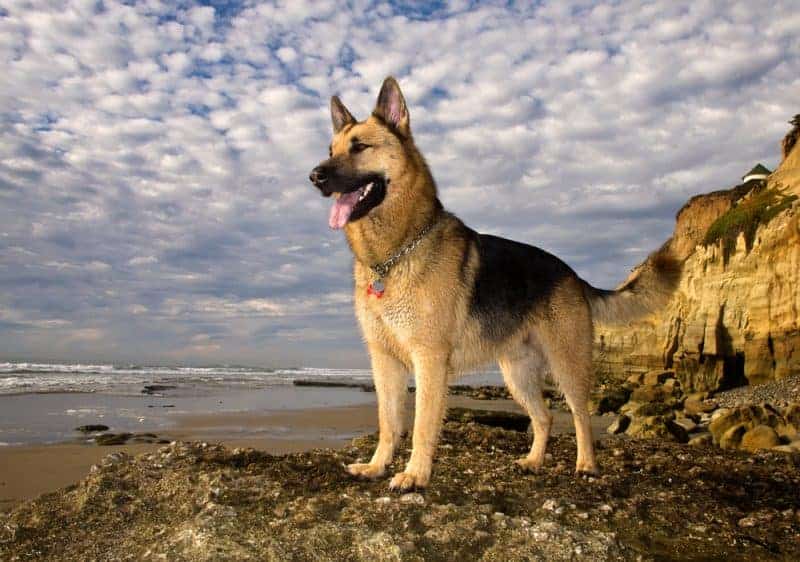 History of the German Shepherd

The ‘Deutsche Schäferhund’ or ‘German Shepherd Dog’ originated from herding breeds in Germany in the late 1800’s under the guidance of Captain Max von Stephanitz.

By around 1918 the breed had reached the shores of the UK following the First World War. A breed club was formed in 1919 in the UK and the breed was known as Alsatian Wolf Dog, a name which was to undergo change later due to the connotations that the breed was aligned with the wolf breed. Hence the name was changed to Alsatian.

In Australia, early imports of German Shepherd Dogs known as “German Sheep Dogs” were known to have hit West Australian shores around 1904.  The popularity of the breed peaked during the 1990’s and the German Shepherd Dog became the most popular breed in Australia in terms of registrations of puppies.

From 1928 to 1972 a ban on the importation of German Shepherd Dogs into Australia was in force. This ban was relaxed in 1972 and removed altogether in 1973. Since that time many fine animals have come to this country from all over the world and the standard of the best of breed here is equal to the high standards of the best in Europe.  Today the breed is still one of the most popular dog breeds in Australia in terms of registrations.

In Australia, the German Shepherd Dog has served with the Australian Defence Forces, Federal, State and Territory Police Forces, Australian Protective Service, Australian Quarantine and Inspectorate Service and State Correctional Services. German Shepherd Dogs in Australia have also been used as guide dogs for the blind, utilised in search and rescue work and employed in a host of other applications. The breed is also a popular choice for Pets as Therapy visits.

The ANKC describes the German Shepherd Dog as medium size, slightly elongated, strong and well muscled, the bones are dry and the overall construction firm.  The German Shepherd Dog is not nimble like the lighter boned Border Collie, rather a tireless worker at its natural gait, the trot.

The German Shepherd Dog is bred in two coat varieties: stock coat (normal) and long stock coat, both with an undercoat.  The Stock Coat (normal) should be as dense as possible, straight, harsh and close lying.  The Long Stock Coat (Long Coat) should be long, soft and not close fitting, with feathering on the ears and legs, bushy breeches and bushy tail forming flags below.

The German Shepherd dog appears in black with reddish tan, black/tan, black/gold to light grey markings. All black, grey (commonly known as sables) with dark shadings; black saddle and mask. Unobtrusive small white markings on the chest as well as very light colour on insides of legs permissible but not desirable.

The period between 12 months and 24 months is a transitional period of gradual muscular development filling the skeletal frame. More serious physical and mental training of your young dog can now gradually commence. Most experts agree that the German Shepherd Dog reaches, or should reach, adulthood at two years of age. Further physical and mental development can occur after this with full maturity being attained at about four years of age.

The ANKC says the German Shepherd Dog must be of well-balanced temperament, steady of nerves, self-assured, absolutely at ease (except when provoked) and good-natured as well as attentive and easy to train. He must possess instinctive drive, resilience and self-confidence in order to be suitable as a companion, watchdog, protection, service and herding dog.  Early obedience training using positive methods and socialisation is the only way this breed can realise these goals.

The German Shepherd Dog is known throughout the world for his trainability and affinity for people. These qualities have helped make the German Shepherd Dog one of the most popular breeds of companion dog throughout the world. These attributes combined with the breeds’ well-balanced temperament, physical size, versatility and courage continue to make it the undisputed king of working dogs.  In fact, the breed is almost a canine version of a Swiss army knife.

As with all dog breeds, aggression in a GSD will be the result of poor breeding, cruel handling using punishment and inappropriate or no training and socialisation.

Diet – How much your adult dog eats depends on his size, age, build, metabolism, and activity level. The quality of dog food you buy also makes a difference–the better the dog food, the further it will go toward nourishing your dog and increase your dog’s longevity.  Discuss with your veterinarian and a responsible breeder about the best diet that is appropriate for a Border Collie’s life stage from puppy to adult to senior. Clean, fresh water should be available at all times. Overfeeding your German Shepherd Dog and letting him pack on the pounds can cause joint problems, as well as other health conditions.  More on nutrition in dogs from German Shepherd Council of Australia

Grooming – Grooming should also be done weekly, with brushing to remove any dead or loose hairs. If it is a long haired GSD, combing will also be necessary. No trimming is required and bathing should only be done as needed. This is a shedding dog but the more you groom it, the less it will shed.   Ear infections must be cleared up fairly quickly, they can rapidly become chronic. Humid conditions acerbate the condition, so if your dog is prone to these problems, increased care and attention is needed.

Shedding – The German Shepherd Dog sheds year-round, and generally sheds a lot of hair twice a year seasonally, you will need to brush out the winter coat during the change to summer.  If you want a German Shepherd, be prepared for hair pretty much all over the house.

Exercise and Games – If you live in the suburbs, you’ll need to engage his mind and strength. The young pup should be exercised with some discretion to avoid long-term damage to still soft and forming joints. As the dog ages, it will require longer walks but must first have the solid bone structure established.

Ongoing training sessions and organised dog sports is a great way provide an outlet for his natural abilities and spend time together. German Shepherds would excel at Agility, Obedience, Tracking, Endurance, Herding and Schutzhund & Ring sports.  Your dog would love to play tug with you.  German Shepherd Dogs were not originally bred for swimming unlike Golden Retrievers and Labradors but if they have a positive experience as a puppy, they could be trained to like swimming.

This dog breed thrives on training!  German Shepherds were bred specifically for their trainability, a trait for which they are now famous. In the book The Intelligence of Dogs, author Stanley Coren ranked the breed third for their innate ability to learn to follow instructions, behind Border Collies and Poodles. He found that they had the ability to learn simple tasks after only five repetitions and perform the first instruction given 95% of the time.

While dog training is imperative for the development of an acceptable temperament and socialisation skills, it’s also a stimulating and exciting pastime for this incredibly intelligent dog.

Dog training is a great way to bond with your dog. Start training your puppy early using positive reinforcement dog training methods. Socialisation with gradual introductions to dogs, people, other animals and things is essential.

A healthy German Shepherd has a life span of 10-12 years.  This breed is known for a number of health issues including the following:

Bloat is, unfortunately, a relatively common condition seen in the older German Shepherd Dog. Breeds of dogs with deep and narrow chests are far more prone to bloat.

Haemangiosarcoma –  This is the most common intestinal tumour seen in all breeds generally (including cross breeds) and is certainly the most common abdominal tumour of the German Shepherd Dog. All GSD’s over the age of 8-9 years of age should have an abdominal palpation with their annual check up.  More on cancers.

Gastric conditions – GSD’s are a breed prone to a number of chronic gastric conditions. These are a group of conditions/disorders that affect the digestion, absorption of food and/or intestinal stability of the GSD. Many of these conditions probably have an allergic or immunological basis (or trigger).

Mammary gland (“breast”) tumours are the most common type of tumour in the unspeyed female dog. Breeds at risk for developing mammary gland tumours include toy and miniature Poodles, Spaniels, and German Shepherds. The average age of dogs at diagnosis is 10-11 years.

Congenital Mega-oesophagus – an inherited disease seen in various breeds including the GSD.

Degenerative Myelitis is a disease that occurs towards the end of the GSD life. This is a devastating condition that
gradually whittles away the mobility and effectiveness of the entire hindquarter. Unfortunately, it occurs usually after the age of breeding, usually 8-9 years and older, a few as early as 5-6 years. The number of physically affected older dogs that are seen would be in the order of around 5% (maximum) of older GSD’s.

Hip Dysplasia: Hip dysplasia is a heritable condition in which the femur doesn’t fit snugly into the pelvic socket of the hip joint.

Elbow Dysplasia: This is a heritable condition common to large-breed dogs. It’s thought to be caused by different growth rates of the three bones that make up the dog’s elbow, causing joint laxity. This can lead to painful lameness.

The German Shepherd Dog is not for the first time dog owner.  As a pet, this breed will suit active families with older children who can provide lots of companionship and commitment to ongoing training and/or dog sports for mental stimulation and well-being.  The GSD craves human company and should not be left alone outside for long periods of time in a backyard as they will become frustrated, destructive and noisy.  The German Shepherd is happiest living indoors with the family, but with access to a fenced yard, where he can burn off some of his natural energy playing games and training with you.

More details on the breed