The French Bulldog is classed as Group 7 (Non-Sporting) by the Australian National Kennel Council (ANKC).

There are many conflicting references as to the origin of the French Bulldog. Some breeders claim the origin can be traced to Britain during the advent of the industrial revolution. The theory is that as mechanisation spread, the lacemakers of Nottingham, some of whom had been breeding toy or miniature bulldogs, were pushed out of their jobs. Many left England for Brittany and France where their skills were in demand. They took with them some of these small bulldogs, many of which had bat (upright) ears. This new style of dog appealed to the French and demand increased so much that breeders began breeding up the ‘French style’ to supply the demand in Paris.

The breed became popular in England in the 1900’s and then in America as Americans in Paris fell in love with them and took them home. Breeders say the French Bulldog has been in Australia since the late 1940’s and was developed from imported English bloodlines.

The French Bulldog is a sturdy, compact, solid, small dog with a short, smooth coat.  Bat ears and short tail characteristic features of the breed. The tail is either straight or cork-screw. The chest is broad and deep with the front of the dog being wider than the back end, forming a pear shape.  The ideal weight for a male dog 12.5 kg and female is 11 kg.

According to the ANKC, the only correct colours are:

The French Bulldog is vivacious, playful, affectionate and easy going.   The Frenchie gets along fairly well with strangers and other animals (as long as they have been socialised in a positive way) and enjoys being with their owners.

Care and Exercise for your French Bulldog 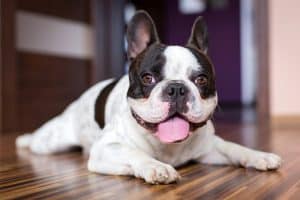 Diet –  The French Bulldog is prone to weight gain.  Discuss with a veterinarian and a responsible breeder about the best diet that is appropriate for your French Bulldog’s life stage from puppy to adult to senior.  How much your adult dog eats depends on his size, age, build, metabolism, and activity level. The quality of dog food you buy also makes a difference-the better the dog food, the further it will go toward nourishing your dog and increase your dog’s longevity.   Clean, fresh water should be available at all times.

Grooming – French Bulldogs are fairly easy to groom and need only an occasional brushing to keep their coat healthy.  French Bulldogs do not naturally wear their nails down and will need their nails trimmed regularly. This prevents splitting and tearing, which can be painful for the dog. Keep the facial wrinkles clean and dry to prevent bacterial infections. Bathe your French Bulldog monthly or as needed, and use a high-quality dog shampoo to keep the natural oils in his skin and coat.

Shedding – The  French Bulldog is an average shedder.

Exercise and Games – A couple of 15-minute walks per day should keep your Frenchie from becoming overweight.  Caution – this breed is highly susceptible to heat exhaustion!  Heat, humidity, exercise, excitement can all increase panting as the dog attempts to lose heat and cool itself.  Most cannot swim so take caution around water.

The French Bulldog responds well to training.  Find a dog training class in your area that uses positive reinforcement dog training methods. Socialisation with carefully managed introductions to dogs, people, other animals and things is essential.

The average life span is between 11-14 years of age. 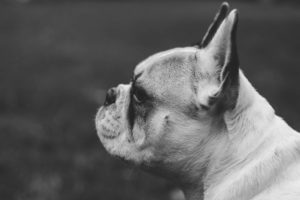 Brachycephalic Obstructive Airway Syndrome is a serious disorder is found in dog breeds with a flat face and a long soft palate.  Their airways are obstructed to varying degrees and can cause anything from noisy or laboured breathing to total collapse of the airway. Dogs with brachycephalic syndrome commonly snuffle and snort.  While some think snorting is a cute feature, it is a sign of respiratory distress. The treatment varies depending on the severity of the condition but includes oxygen therapy as well as costly surgery to widen nostrils or shorten palates.

The operation to clear a dog’s airway will cost at least $2,500 but the bill can balloon to about $13,000 if there are complications.

“It’s major surgery because you’re going into the airways and cutting tissue out. They can have an elongated soft palate that hangs into their airway and that is often surgically removed,” Dr Jade Norris, RSPCA

Talk to a veterinarian about health issues for this breed for bringing home a Frenchie.

French Bulldogs have become increasingly popular with families in the city and suburbs because they do not need a lot of room and do very well in apartments or small dwellings.  The Frenchie thrives on companionship, so this breed would be unsuitable for families where all members are at work all day.  If you want to jog with a dog, the Frenchie is not for you.  The French Bulldog enjoys rambling walks on a regular basis.

Do you live in a hot climate? This is not a dog who can stay outside on a hot day.  The Frenchie is highly susceptible to heat exhaustion and needs a cool environment on hot days.