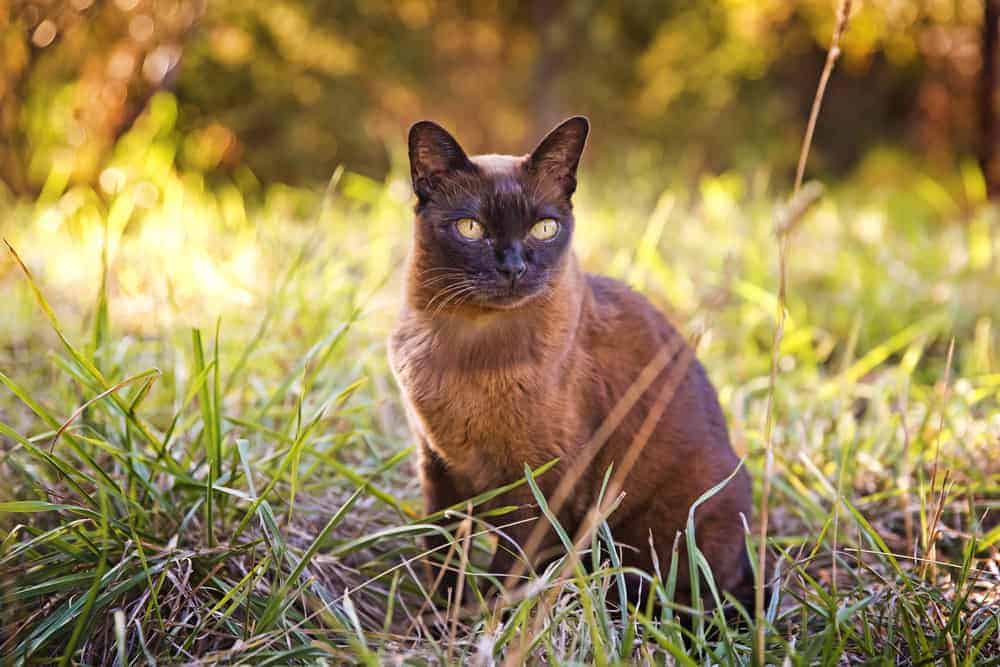 The Burmese Cat is classed as Group 3 (BUR) by the Australian Cat Federation (ACF).

The Burmese cat breed as we know it today was developed in the United States from a single cat, Wong Mau who in 1930 was brought from the Orient to New Orleans by a sailor, and given to a doctor in San Francisco. Wong Mau was described as “a rather small cat, fine-boned, but with a more compact body than that of a Siamese, with a shorter tail, a rounded, short-muzzled head, with greater width between rounded eyes.” Her colour was described as walnut-brown, with darker brown points.

Breeding from such limited stock proved to be too difficult without the use of the Siamese breed, thus leading to large numbers of hybrid breeds. Interestingly, the Cat Fanciers Association (USA) ruled that there had to be 3 generations of ‘pure’ Burmese before such a breed could be correctly recognised and registered.

Achieving the three-generation “pure” pedigree was slow, but finally accomplished for three cats in 1956. By late 1957, there were sufficient numbers and CFA resumed registration of the Burmese.

Burmese were highly successful in the show ring from the outset, reaching the peak of their popularity in the 1970s, when they were the third most popular breed behind Persians and Siamese. For a breed that had started in the United States with one cat in 1930, the Burmese had become solidly established as a highly popular and successful member of the cat fancy.

The body of the Burmese is akin to that of a little bulldog. There is nothing dainty about a Burmese; it is strong and muscular, with a broad chest. The body feels hard like that of an athlete. What consistently surprises people is how heavy they are, given their relatively small size. There is a lot of muscle and power packed into that small frame.

Burmese cats are laid back, social, intelligent, gentle and extremely sweet natured cats as well as being quite intrusive in their curiosity. They are less vocal than their Siamese cousins.

Burmese are playful cats, especially when they are younger but they are not constantly on the go like some other active breeds. Once they have worn themselves out, they love nothing more than sleeping on their human companion’s lap. With a dog-like personality, they will follow you around the house all day long, hoping to get a pat or stroke and get along with everyone, including children and other pets. If you stop, they may flop down on the floor at your feet in the hope of a belly rub. Male Burmese cats are very affectionate, females are too, but a little more independent.

Diet – Your Burmese kitten or cat should be fed high-quality dry food and canned food.  Current veterinary guidelines recommend feeding both wet (canned) and dry food. Canned food is important especially for kittens. Adults often prefer just the dry kibble, but if you can get them to eat a little-canned food every day, it is good for them. Research suggests that both the dry and canned foods should be as high as possible in meat protein, and as low as possible in grain content.

(As with many cat breeds, do not feed milk! Kittens don’t have the enzyme to digest milk properly after they are weaned)

Talk to a veterinarian about the nutritional requirements for this cat breed.

Grooming – Burmese cats are low maintenance. A weekly brush will help remove loose hairs but this can also be achieved by regular stroking and petting. Indoor cats may need to have their claws trimmed every few weeks. This, along with grooming should be started when they are a kitten.

Shedding – Burmese cats are considered hypoallergenic because they shed very little. Providing your Burmese is healthy and well cared for, his coat should not shed much. If your cat’s coat still looks lacklustre, visit your veterinarian to rule out any underlying medical issues.

The average life expectancy of a Burmese cat is 10 to 16 years.  The Burmese can be more prone to certain medical conditions than other cats including:

This list may look long but a lot of these conditions are rare even in Burmese, and others can be either prevented (such as periodontal disease) or managed with annual check-ups, and good care.

Talk to a veterinarian about the health issues of this cat breed.

Burmese cats are very friendly and people oriented. They thrive in the company of others and make an ideal family pet.

Always supervise interaction between a young child or other animals and your new kitten/adult cat!  Find out more about creating smooth introductions in our Paw Perfect Introductions podcast with renowned animal behaviourist Dr Joanne Righetti.