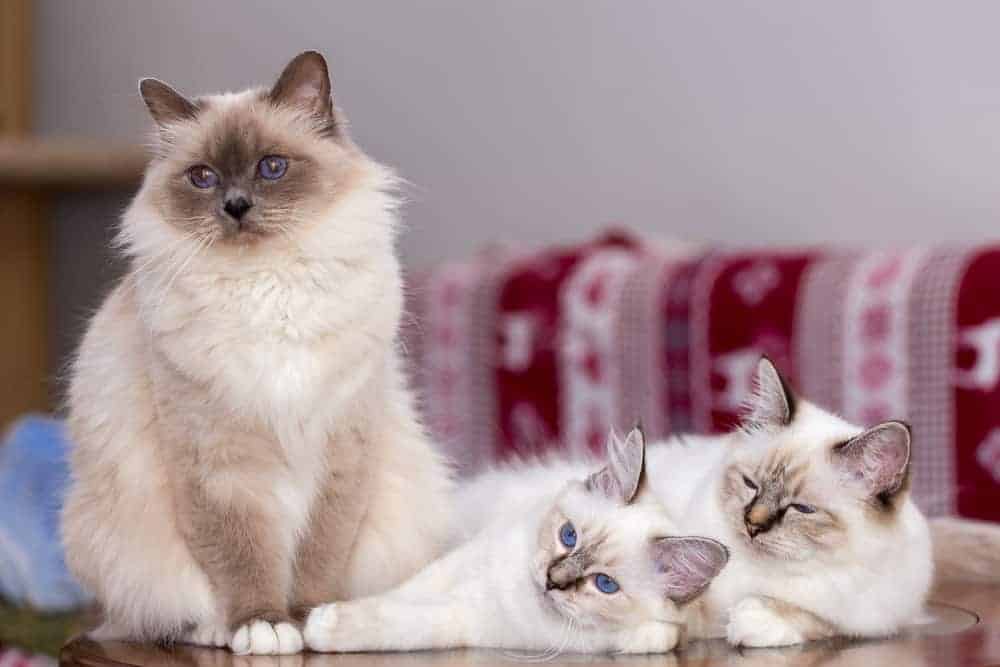 The Birman Cat is classed as Group 1 (SBI) by the Australian Cat Federation (ACF).

No clear record of the breed’s origin exists. They are most often claimed to have originated as the companions of temple priests in northern Burma in the Mount of Lugh. Many stories exist of how the cats first came to France, including pairs of cats being given as a reward for helping defend a temple, or being smuggled out of Burma by the Vanderbilt family. Another pair of Birmans (or a pregnant female called Poupée de Maldapour) were said to have been stolen and later imported to France by Thadde Haddisch.The first traces of historical Birmans go back to a Mme Leotardi in the city of Nice in France.

Another alternative history of the Birman cat is that the arrival of the Birman in Europe began in 1919 with two Englishmen, Major Gordon Russell and August Pavie, who were living in France at the time.

Birman cats were almost wiped out as a breed during World War II. Only two cats were alive in Europe at the end of the war, a pair named Orloff and Xenia de Kaabaa, both belonging to Baudoin-Crevoisier. The foundation of the breed in postwar France were offspring of this pair. They had to be heavily outcrossed with long-hair breeds such as Persian and Siamese to rebuild the Birman breed. By the early 1950s, pure Birman litters were once again being produced. The restored breed was recognized in Britain in 1965 and by the CFA in 1966. The first Birman cats were seal point. The blue point colour was introduced in 1959 using blue Persian lines. New colours were later added by English breeders including chocolate, red, and tabby/lynx points. Birmans have also been used in the development of new breeds, notably including the Ragdoll breed.

The Birman cat is similar to the Siamese of Thailand, but he has a stockier body, white feet, and a long, silken coat that comes in all pointed colours, including Seal, Blue, Lilac, Red, Cream, Chocolate, Seal Torti (female only breed), Seal Tortie Tabby, Blue Tabby, Seal Tabby.

He’s considered a medium- to a large-sized cat, weighing between 3 and over 5 kgs. 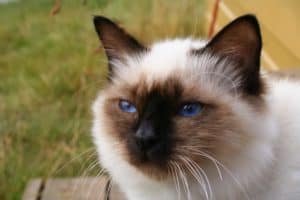 The Birman is a calm, affectionate feline who enjoys spending time with his family — especially if you lavish lots of attention.

Birmans get along well with children and other pets. If you talk to him, your Birman will respond in a soft, pretty voice, but he’s not as vocal as the Siamese. Although Birmans are less active than some breeds, they have a serious playful side. It’s not unusual for them to fetch or chase a ball – although they seem happiest whilst curled up on someone’s lap.

Diet – Just like any other cat breed, the Birman is a natural carnivore.

This means that your pet will need to have a good meat-based diet and to eat lots of food that’s rich on taurine amino acids in order to stay healthy. Dried cat foods aren’t the best choice when it comes to this particular breed.

Not only do Birmans need moist and oily food, but their diet needs to be properly balanced and to include more than enough nutrient properties, especially if your kitten is a youngster. The Birman won’t get enough nutrition from vegetable-based food, although spicing up your kitty’s meat-based diet with vegetable-based products every now and then will ensure that your Birman will get the most out of every meal.

Talk to a veterinarian about nutritional requirements for the Birman cat.

Shedding – Birmans shed their winter coat in the spring, so you may want to comb more frequently at that time to remove loose hair. A warm bath can also help to loosen and remove the shedding coat. To accomplish a Birman bath, wetting the cat with a hand-held shower nozzle is often preferable to immersing him in a tub of water.

Birman cats generally have a lifespan of between 12 and 16 years.

Problems that may affect the Birman include the following:

Talk to a veterinarian about health issues in the Birman cat breed.

The friendly, laidback Birman is a perfect choice for families with children and cat-friendly dogs. He loves the attention he receives from children who treat him politely and with respect, and he doesn’t mind playing dress-up or going for a ride in a baby buggy.

He is happy to live with cat-friendly dogs, too, thanks to his amiable disposition. Introduce pets slowly and in controlled circumstances to ensure that they learn to get along together.

The Birman cat does not like being left alone if the family is out for most of the day.

Always supervise interaction between a young child or other animals and your new kitten or adult cat!  Find out more about creating smooth introductions in our Paw Perfect Introductions podcast with renowned animal behaviourist Dr Joanne Righetti.

The Birman Cat Club of Australia