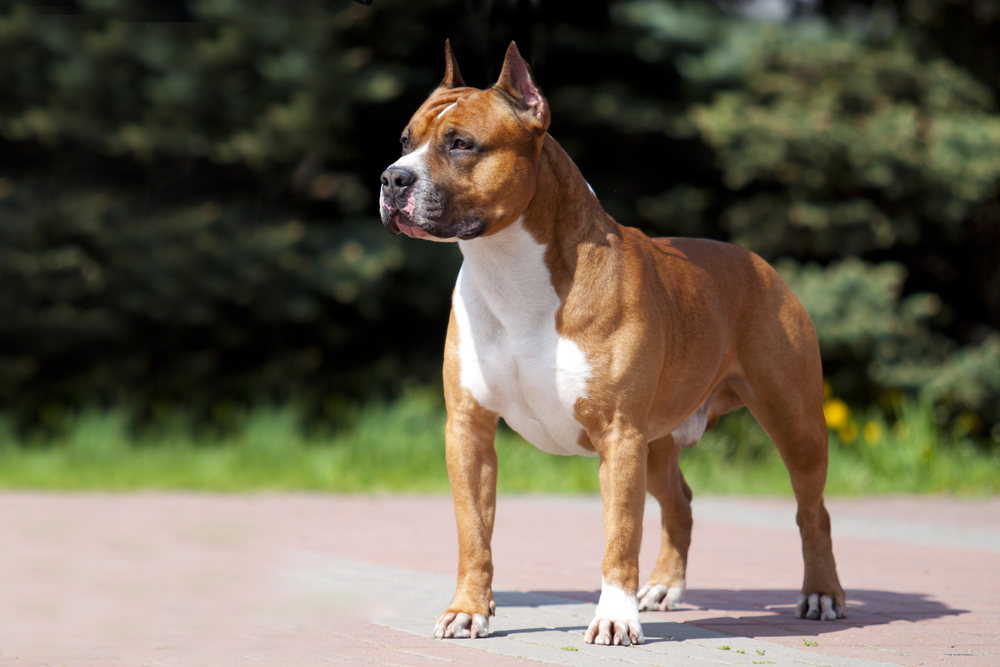 The American Staffordshire Terrier also is known as the Amstaff is classed as breed Group 2 (Terriers) by the Australian National Kennel Council (ANKC).

History of the American Staffordshire Terrier

The Bull & Terrier is one of the earliest descendants, bred in Britain from a combination of the Bulldog of the time and either the Black & Tan Terrier or the larger English Terrier. It has even been suggested that the Fox Terrier may have been introduced. This combination produced a powerful and extremely game dog, who because of these traits, was unfortunately exploited as a fighting dog for much of his early history.

Brought to the United States, the breed was preferred by American breeders who increased its weight and gave it a more powerful head.  Now recognized as a separate breed, the American Staffordshire is larger and heavier than his British cousin, the Staffordshire Bull Terrier. After dog fighting was banned in the United States in 1900, two strains of these dogs were developed, a show strain and a fighting dog strain. The show strain was labelled the American Staffordshire.

The American Staffordshire Terrier gained Australian National Kennel Club recognition in 1987.  The Amstaff is quickly gaining popularity in Australia while it has long been established as one of the most popular terrier breeds in the USA and Europe.

The Amstaff is a medium sized, short coated dog that combines agility and grace with great strength for its size. Although muscular and stocky, the Amstaff is very much an athletic dog, able to twist and turn on a dime.

The ANKC says this breed should give the impression of great strength for his size, a well put-together dog, muscular, but agile and graceful. He should be stocky, not long-legged or racy in outline.

Size and weight of the American Staffordshire Terrier

Whilst the Australian Breed Standard does not specify weight ranges it does state that height and weight should be in proportion.

Colours of the American Staffordshire Terrier

The American Staffordshire Terrier appears in any colour, solid, parti, or patched is permissible, but all white, more than 80% white, black and tan, and liver not to be encouraged.

The modern American Staffordshire Terrier is a companion and show dog, rather than a gladiator.

The ANKC describes this breed as ‘keenly alive to his surroundings. His courage is proverbial.’  The Amstaff’s courage is renowned and the breed’s determination and indomitable spirit stem from its terrier ancestry. This very confident, self-assured dog delights in contact with all humans and its reliability with children are all part of its considerable charm.

They do have the tenacity of the terrier.  So, it’s important to gain an understanding of terrier traits and personality.  The American Staffordshire Terrier will make a good watchdog, is boisterous with tremendous stamina.

They are wonderful as working dogs, competitors in conformation, obedience, Schutzhund, agility, and weight pulling competitions to name a few.

As with all dog breeds, aggression in an American Staffordshire Terrier can be the result of poor breeding, cruel handling, and inappropriate training and poor socialisation.

Care for the American Staffordshire Terrier

Diet – How much your adult dog eats depends on his size, age, build, metabolism, and activity level. The quality of dog food you buy also makes a difference–the better the dog food, the further it will go toward nourishing your dog and increase your dog’s longevity.  Discuss with your veterinarian and a responsible breeder about the best diet that is appropriate for an American Staffordshire Terrier’s life stage from puppy to adult to senior. Clean, fresh water should be available at all times.

Grooming – Their short coat requires little grooming and is easy to keep clean. Brush on a regular basis with a firm bristle brush, and bathe only a few times a year as required. It is also recommended to rub them down with a piece of towelling or chamois as this will make their coat shine.

Shedding – The American Staffordshire Terrier’s short coats shed minimally throughout the year and heavily twice a year as the seasons change.

Exercise and Games – Ensure your American Staffordshire Bull Terrier gets plenty of exercise! Dog sports are a great way to spend time with your dog. The Amstaff is extremely athletic and agile and excels at agility and obedience.  His strong jaws would enjoy a game of tug with you.

The American Staffordshire Terrier is a highly trainable dog breed. This dog breed would thrive with ongoing training. Dog training is a great way to bond with your dog. Start training your puppy early using positive reinforcement dog training methods. Socialisation with gradual introductions to dogs, people, other animals and things is essential.

UK vet clinic data puts the median at 10.7 years for a healthy American Staffordshire Terrier.   This dog breed is known for a number of health issues including the following:

Suitability of the American Staffordshire Terrier as a pet

They are not always a breed for everyone; can be too much dog for the inexperienced, and are not generally a good choice for first-time dog owners.

The Amstaff has been described as a  loving and loyal family pet.  And a well cared for and properly trained (using positive methods) Amstaff can make an amazing addition to any family.

These dogs demand and thrive on a great deal of attention so be sure you are ready to devote the time required to training and socialising your Amstaff.  This breed has tremendous stamina and therefore not recommended for an inactive owner.

The Amstaff is not a breed that can be left alone for long periods in the backyard. They love to spend lots of time with their human family. If you want a dog that does not come inside, the Amstaff is not for you.

Thinking of getting a dog? Download our FREE eGuide: Before you get a dog – 8 essential tips to get it right.