6 dog breeds suitable for an apartment

6 dog breeds suitable for an apartment

So, when choosing a dog breed for an apartment, the most important considerations are energy level and propensity to bark.  You may need to think about dog breeds that were not originally bred to alert, defend or guard.  Being fairly calm indoors and trained in good manners are good qualities in an apartment dog.

Note that when choosing a dog breed, there is not only variation in dog behaviour between different breeds but also variation between individuals within a dog breed.

6 dog breeds suitable for an apartment (in no particular order) 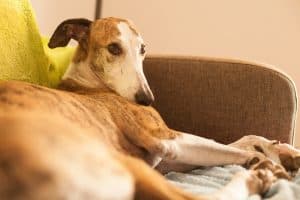 You may need another sofa just for your Greyhound! Photo: Asier Romero/Shutterstock.com

The Greyhounds is a dog breed suitable for an apartment because they sleep 20 hours a day, rarely bark and generally are not territorial.  They are a low-maintenance dog – their skin produces little oil so only a few baths a year are needed.

The instinct to chase prey has been characteristic in the greyhound for thousands of years.  So, don’t let them off the lead in an unfenced area as they will want to investigate and potentially chase a small animal.

Greyhounds just need one short run each day to stay fit but they do require several outdoor excursions a day to relieve themselves.  You can expect your greyhound to dash down your hallway a few times a day to burn off energy and then spend the rest of the day storing up energy (usually on your couch!) for the next burst according to Greyhounds As Pets. 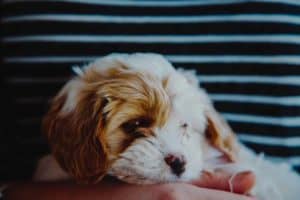 Cavoodle has the best of both worlds for an apartment – lap dog Spaniel and low shedding Poodle. Photo: Matty Sievers/Unsplash.com

The Cavoodle is a hybrid of a Cavalier King Charles Spaniel and a Poodle (toy or miniature). They have become increasingly popular over the last 10 years.

The Cavoodle is one of our top dog breeds suitable for an apartment because they can adapt to living in an apartment as long as they receive adequate daily exercise. Deliberately bred as a companion dog, the Cavoodle has an adorable temperament. This breed is low shedding and often tolerated by allergic people.  Their coats do take a great deal of care though, generally requiring professional grooming about every six weeks for a clip of your choice. You’ll need to do regular brushing and combing at home.

Be sure to visit the breeder and ask about health testing, particularly heart tests because Cavalier King Charles Spaniels can suffer from a few inherited disorders including the early degeneration of the heart valves, especially the mitral valve. 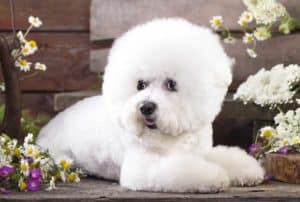 Bichon Frise is one our dog breeds suitable for an apartment, low shedding and great companion.
Photo: hutterstock.com

The Bichon Frise is a small, sturdy, white powder puff of a dog according to the American Kennel Club.  This breed descended from the Barbet or Water Spaniel and the Standard Poodle.  The bichon breed is originally Spanish, used as sailing dogs (as a sailor’s companion), but when the French took over this gentle breed became a lap dog species. The Bichon was popularized in Australia in the mid-1960s.

The Bichon Frise is recommended as a dog breed suitable for an apartment because they are low shedding and great company for humans and other animals. Note that they are hypoallergenic but they themselves suffer from allergies to fleas, chemicals, pollen, dust, etc.

It is best to have a Bichon Frise professionally groomed approximately every four to eight weeks. Daily brushing of the coat helps to prevent matting. 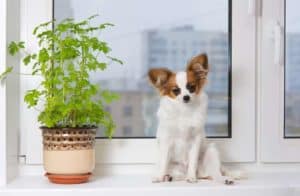 The Papillon can be a great little dog for an apartment. Photo: Shutterstock.com

This breed appeared in paintings in the 1200s and was known then as the toy Spaniel and was owned by royalty and noblemen. Many paintings feature the toy Spaniel with dropped ears called the Phalene (moth) and the large erect ears of the Papillon according to Pedigree.com.au.

This breed is on our list of apartment friendly dog breeds because it is a friendly little dog that’s easy to manage in a small back yard or unit. It loves company, is very trainable and can be taught tricks or obedience.  However, some Papillons are very highly strung according to veterinary Behaviourist Dr Gaille Perry, Delta Institute.  So, find out as much as you can about the puppy’s personality and his parents beforehand.

The Labradoodle may not be the obvious choice for dog breeds suitable for an apartment. Photo: Shutterstock.com

The Labradoodle is a hybrid of a Labrador retriever and a Poodle (toy, miniature or standard). In the 1980’s Poodles and Labradors were crossed in an attempt to produce non-shedding hypoallergenic guide dogs. They have become increasingly popular over the last 10 years.

The Labradoodle is probably not on other lists of dog breeds suitable for an apartment because the standard dog can weigh around 25 – 30kg, which means they need room to rest and move around.  This breed is on our list because they generally have a cheery, calm temperament, trainable, low shedding and don’t bark much.  Labradoodles are very gentle good with children and enjoy being part of the family unit.  You will need to ensure your Labradoodle receives his daily exercise at the dog park.  Dog training using rewards based methods is essential but then this is important for all dog breeds!

Pet Parent Caroline Rockey shares her experience about raising a Labradoodle puppy in an apartment. 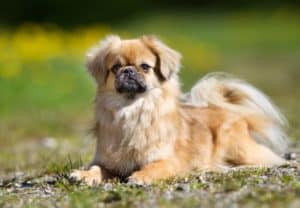 Tibetan Spaniel can adjust to an apartment but they are very active. Photo: Shutterstock.com

When we asked Dr Gaille Perry, for her recommendations for dog breeds suitable for apartments, the Tibetan Spaniel was mentioned as being quite popular.

Adopted in Australia from 1 January 1998, the Tibetan Spaniel should be small, active and alert according to Australia National Kennel Council.  The Tibetan Spaniel is a most charming and highly intelligent little dog which originated in the Himalayan mountains of Tibet.

Dogs Victoria says Tibetan Spaniels are equally at home in an apartment or a country property. A Tibetan Spaniel should not be left alone for long periods, such as when the owner/s are working, as it may fret and become depressed without company (this could be said for most dogs!).  They are very active for their size and need and enjoy regular exercise, as much to alleviate boredom as to promote fitness.

Note: If you work full time, think about how you will ensure your pet will receive adequate company, mental stimulation and exercise daily to keep him happy and healthy.

Before you get a puppy or adult dog, download our free eGuide: Before You Get A dog – 8 essential tips to get it right.