Archeological evidence suggests that cats were commonly found in association with human settlements in the Fertile Crescent (Israel and the surrounding countries) by 3700 years ago, and they became an ‘official deity’ (in the form of the goddess Bastet) in Egypt around 2900 years ago. Large numbers of cats were sacrificed to Bastet and mummified at that time, indicating that the Egyptians were actively breeding cats. By 2000 years ago there was increasing evidence of cats spreading throughout Europe. 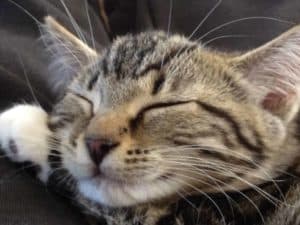 The domestic cat is a complex creature and unfortunately, problems can arise for cats because sometimes we do not understand their natural drives and reactions. Understanding what kind of environment they prefer to occupy, their social structure, feeding patterns, and even toilet habits can influence decisions made about their care that have a significant benefit to their quality of life.

Our pet domestic cat, Felis catus has proved to be a remarkably adaptable species, and while retaining its roots as a solitary hunter, in a number of situations (both natural and artificial) will adapt to group-living through the development of social structures.  (Source: International Cat Care)