Summer is the season to be out and about but there are unexpected dangers for outdoor pets including snake and tick bites in cats, which are deadly if not treated early!

Snake bites in dogs and cats are a relatively common occurrence in regional areas of Australia.  The clinical signs of snake bites observed in cats vary significantly.

Signs of snake bites in cats

These are often the earliest signs of envenomation include: 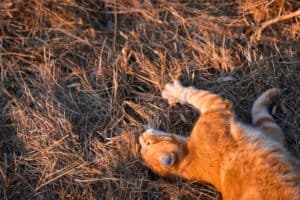 Other signs of snake bites in cats also include:

These signs are often transient and inconsistent and may not be present.

Treatment of snake bites in cats

The key to the treatment of snake bites is the prompt administration of antivenom and supportive care. Intravenous fluids, antihistamines, adrenaline and respiratory support (supplementary oxygen +/- ventilator) may all be necessary if supportive therapy is to be successful. Hospitalisation for a minimum of 24 hours is usually necessary to ensure adequate monitoring and treatment. Additional drugs (eg atropine; furosemide) may also be necessary during the course of treatment should complications arise. Antibiotics are frequently administered to avoid secondary infections.

Generally, treatment outcome is significantly improved if the animal is hospitalised and antivenom is administered. However, multiple vials of antivenom and mechanical ventilation are often required in severely envenomated animals. Thus, it must be kept in mind that cost of treatment may be high.

Tick paralysis remains a key issue for pet parents in Australia’s eastern states.  The Northern Beaches in Sydney has one of the highest incidents of ticks in the country.

If your cat has come into contact with a paralysis tick they will experience paralysis in a variety of forms. A typical case will start with a weakness in the hindquarters that will then progress to total paralysis of all four legs.

Other early symptoms may include the following:

While new, improved products are appearing quite regularly, the paralysis tick does become resistant to insecticides. Thus, none can ever claim to be 100% effective. So even if you use one (or a combination) of products, you should still search your pet(s) every night during the tick season. These search-and-destroy missions become even more imperative after your animal has been in bushy terrain. A small tick missed one day is often found the next. Incidentally, tick control on dogs tends to be easier than on cats but, luckily for cats, they seem better able than dogs to remove attached ticks by scratching.