Lest we forget our four-legged diggers: Smoky the War Dog

This Remembrance Day, we commemorate all the animal deeds and sacrifices in war, in particular, a small Yorkshire Terrier no bigger than an army helmet, but with a heart of a lion. ‘Smoky’ as she was known, initially served alongside Australian and US troops in the jungles of the Pacific.

Smoky’s exploits during World War II has not been forgotten in Australia thanks to the efforts of War Historian, Nigel Allsopp and the Australian War Animal Monuments Organisation (AWAMO).  A war monument honouring the little Terrier was erected in Queensland in 2012 and was also dedicated to all war animals who served.  Smoky has been nominated for a Purple Cross for what she had done for Australian Servicemen.

Smoky was born and sold within 200 metres of General MacArthur’s Headquarters, at a Brisbane veterinary clinic in 1943, and her path would cross with General MacArthur on many occasions.  Smoky became separated from her owners.  She found cold and wet in a foxhole in the jungles of New Guinea and adopted by a young American Officer, Bill Wynne. 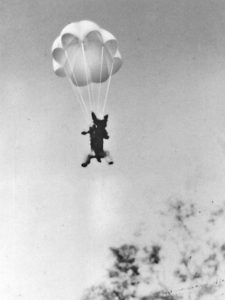 Smoky had her own parachute during WWII. Photo courtesy of Bill Wynne

Bill trained Smoky in obedience and tricks and she soon appeared in the YANK magazine as Champion Mascot of the South West Pacific Area.  She went through the war surviving on terrible food, tropical heat, air raids, kamikaze attacks at sea, flying combat missions and island hopping until the war’s end.

Her status as the mascot was soon elevated to that of War Dog and Heroine.  Stringing communication wire was a major challenge.  It would have taken three days to dig a new trench to lay the wires.  Smoky had a string tied to her collar and Wynne coaxed her through a pipe to lay the wires for a new trench.  She burst forth into Bill’s arms and came through in about two minutes.

Bill would return to Australia as part of missions on regular occasions.  When Bill received a 15-day convalescent furlough to Coolangatta, Queensland, he took Smoky.  Stopping at the American Red Cross in Brisbane, Bill decided to stay there for his leave after he was asked to take Smoky to the US 109th Fleet Hospital and 42nd General Hospital. Bill and Smoky travelled up and down many wards at each hospital with Smoky performing his tricks to the wounded.  The men followed them around to other wards and many wanted to carry her on their wheelchairs.  Smoky was pioneering the work of Post-Traumatic Stress Disorder (PTSD) dogs. 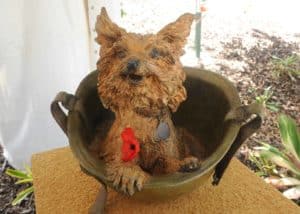 Smoky’s work as a therapy dog continued for 12 years, during and after WWII. Smoky retired in 1955, and she died in her sleep two years later in 1957 at the age of 14.

In Bill Wynne’s mind her ability to make a difference was really quite simple:

She was just an instrument of love.

Nigel Allsop has written a book, ‘Smoky The War Dog‘.  All profits from the sale of this book fund two Post Traumatic Stress Syndrome Dogs working at Enoggera in Queensland with Afganistan returned soldiers. Smoky the war dog is still helping others 70 years after her death.

Smoky the War Dog soon to be a movie star

Nigel Allsop has revealed that a movie will be made about Smoky and her exploits in the Philippines.  Filming starts in April 2016.