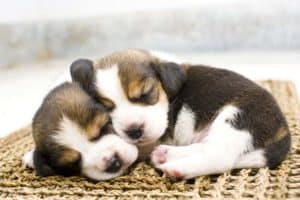 Early socialisation by the breeder/foster carer is crucial!

The four stages of puppy development are also known as sensitive periods.  In the 1960s, Scott and Fuller investigated the critical period phenomenon.  They found that there appeared to be definite critical periods for all aspects of social behaviour in all species and classified these periods by the major developmental step which begins (or ends) that period.

It’s important a pup gets a good start in life – from the time he is born – until the juvenile stage and beyond.

In a nutshell, here are the four stages of puppy development and how you as a pet parent can help your pup grow into a happy, well-adjusted dog.