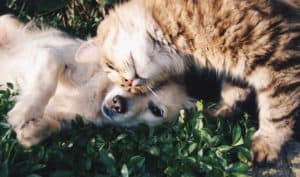 The Australian Veterinary Association (AVA) is praising pet owners for taking a proactive approach to maintaining the health of their pets.

According to the recently released Pet Ownership in Australia 2016, produced by Animal Medicines Australia (AMA), pets are living longer and happier lives.  The research has revealed a widespread shift in thinking around the role of veterinarians in Australia with more pet owners looking to their vet to help keep their pet healthy, instead of just treating them when they are sick.

President of the Australian Veterinary Association (AVA), Dr Robert Johnson, said that more and more pet owners consider their pets as part of the family. This has led to a desire to ensure their pets live long, happy and healthy lives, placing more emphasis on a vet’s role in preventing illness rather than treating problems.

“In the space of just three years, from 2013 to 2016, we’ve seen pet owners change their view on the role of veterinarians. In 2013, the view was that vets were there mostly to treat pets when they’re sick. This was by far the dominant view with 85 per cent of those surveyed identifying this as the vet’s primary purpose.

Pets are living longer and happier lives in 2016

“2016 tells a very different story. Pet owners now place almost as much value on a vet’s role in being proactive in preventing illness as they do in a vet’s role in treating illness or injury. In 2016, 72 per cent of pet owners viewed the role of vets as treating pets when they’re sick and 71 per cent viewed the role of vets as keeping pets healthy.

“It’s a positive shift in thinking because being proactive when it comes to healthcare will give pets the best chance of avoiding illness and living longer. It also helps to avoid more serious illness which can lead to more time and money in treatments. It’s great to see pet owners working in partnership with their vets to develop a health plan that’s right for the owner, their pet and their budget,” Dr Johnson said.

“This humanisation means that pet owners are increasingly taking steps to maintain their pet’s health. Regular vet visits, keeping up-to-date vaccinations, investing in special diets, treats and grooming are all measures that owners take to maximise their pet’s longevity.

“In the area of healthcare alone, which includes parasite prevention and dietary supplements, we’ve seen expenditure grow by 40 per cent in just three years to $1.4 billion annually. It really highlights the importance owners place on ensuring long-term health outcomes for their pets, and vets are critical to achieving this.