The most common intestinal worms in cats are Roundworms and Tapeworms in Australia.  Roundworms have short and rounded bodies whereas Tapeworms are long flat worms composed of many individual segments.  Intestinal Roundworms occur in cats of all ages throughout the world, however, kittens are the most susceptible to Roundworm infection and disease.  Tapeworms are only usually a problem in older cats unless a kitten also has fleas. 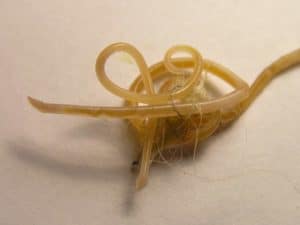 The two common Roundworms of cats are called, Toxocara cati and Toxascaris leonina.  Eggs from these worms are passed in the faeces and can remain viable in the environment for several years. These eggs can infect other cats in two ways. First, a cat may eat (ingest) eggs directly from a contaminated environment. Second, if another animal eats the eggs (eg, a mouse or rat), these can act as ‘intermediate hosts’ and pass on the infection to a cat if it preys on (and eats) the infected intermediate host.

Toxocara cati is also passed from queens (mother cats) to kittens through the milk she produces. Whenever a cat is infected with Roundworms, some immature forms (larvae) remain dormant in tissues in the body. This usually causes no harm, but when a female cat becomes pregnant, these larvae migrate to the mammary glands and are excreted in the milk she produces for the kittens.

Signs of intestinal Roundworms in cats may include:

In most cases, regular routine treatment for Roundworms is recommended throughout a cat’s life. However, to determine if a cat is actually infected with worms, a faeces sample can be collected and examined in the laboratory to look for the presence of the worm eggs.

Worming your cat for Roundworms

Roundworms are extremely common in kittens, and as kittens can be infected from the mother’s milk it should be assumed that all kittens are infected. Worming should be started at a young age. The common recommendations are to:

Tapeworms are generally long flat worms composed of many segments. Mature segments containing eggs are released from the end of the tapeworm and are passed in the faeces. These segments often resemble grains of rice and can sometimes be seen on the hair around the anus of the cat, in the faeces and on the cat’s bed.

The most common Tapeworms that infect cats worldwide are Dipylidium caninum and Taenia taeniaeformis.   Dipylidium caninum is transmitted to cats by fleas. The immature fleas larvae ingest the eggs of the worm, but infection is then passed on to a cat when it swallows an infected flea during grooming. The cat chews or licks its skin in response to a fleabite, and inadvertently swallows the flea.  So, flea control is very important!

Taenia taeniaeformis is passed on when they eat small rodents (rats and mice), the rodents having eaten eggs from the environment. This infection occurs very commonly in cats that hunt. Keep your cat indoors or away from garbage or dead animals.

Signs of Tapeworms in cats

You can often see the dried sections of Tapeworm around the cat’s anus. They resemble rice grains.

Occasionally, a Tapeworm will release its attachment in the intestines and migrate to the stomach. When this happens, the cat may vomit an adult Tapeworm several inches in length.

Worming your cat for Tapeworms

Treat adult cats (greater than six months of age) every one-three months with a product that is effective against both Tapeworms and Roundworms.  A product active against Dipylidium caninum should also be used in kittens that have flea infestations.