Inherited cat disorders are conditions that arise due to abnormal genes that are passed down from one generation to another.  Cats suffer from inherited disorders like other animals, but they tend to be more common among pedigree cats because the selective breeding and in-breeding (breeding together very closely related cats) used to develop particular characteristics of the breed, may also increase the risk of inherited disorders. Indeed, in some cases, the breed itself is based on an inherited disorder which, in some cases, can be extremely harmful to health. (Source: International Cat Care)

Dr Richard Malik, Senior Consultant at the Centre for Veterinary Education, University of Sydney presented a paper “Welfare and ethics in companion animal breeding: an opinionated perspective” at the RSPCA Science Seminar in 2012.  In his paper, Dr Malik says the situation with diseases in cats is different to dogs.  Historically cats have decided on their own sexual partners, widening the gene pool, whereas a substantial proportion of dogs are purebred or purebred cross.

However, according to Dr Malik, any deviation from the standard cat can cause problems – the squashed in faces of Persians create breathing problems and the defining Manx tail deformity can often cause neurological abnormalities.  Here are a few examples of inherited cat disorders to watch out for: 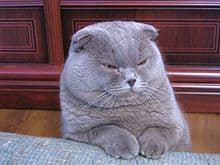 The breeding of the Scottish Fold cat was banned in the United Kingdom many years ago after the degree of genetic mutation was deemed cruel.  Breeding these cats has recently been banned in Victoria.The Scottish Fold breed developed in Scotland when a cat was discovered with forward folding ears.  However it was soon discovered that mating two Scottish Folds resulted in cats with shortened, malformed legs, and the gene responsible for the ‘cute’ ear caused early arthritis.  The cartilage in the cat’s ear is too weak to maintain a normal shaped ear and Dr Malik says it is hardly surprising that articular cartliage cannot cope with the wear and tear of a typical cat’s agile and athletic lifestyle.  All Folds suffer problems to some extent even a kitten produced from a Fold to a non-Fold mating.

Munchkins are cats with legs a third of the normal size.  They cannot climb or jump.  They have been described as a “mini-legged” mutant.  According to the NSW Cat Fanciers Association, these cats had their skeletal form distorted to give a stumpy legged look similar to a Dachshund.  Breeding these cats has been banned in Victoria.

Devon Rex cats are an enchanting breed which has as their defining feature an autosomal recessive defect of the hair follicle.  Muscular dystrophy (erroneously called “spasticity”) has been reported in Devon Rex cats with the autosomal recessive defect with muscle weakness is the predominant feature.  Affected cats usually show obvious signs of a locomotor problem when six to 20 weeks of age.  Affected cats have a generally unsatisfactory quality of life and are at risk of sudden death due to obstruction of the pharynx/larynx with food. In the late 1990s, the problem also appeared in Sphinx cats likely because Devon Rex cats were used to add diversity to this hairless breed.

Polycystic kidney disease is an autosomal dominant disorder which is seen in all breeds of cats, with the highest prevalence in Persian cats and related pure-bred, long-haired cats. Cysts cause a predisposition to kidney infection, and the progressive enlargement of cysts eventually causes  progressive deterioration in renal function. Some cats can live near-normal life spans, while others succumb to renal failure in middle age.

Snowy and Hazy, (image via Wikepedia)

Lymphoma is the most common malignancy diagnosed in cats.  However, these cats have an inherited predisposition to lymphosarcoma.  Fortunately they cats respond well to chemotherapy and have an excellent prognosis. They also often are cross-eyed and have associated visual abnormalities that result in absence stereopsis (no binocular vision and hence no depth perception).

The Burmese have low blood potassium which can result in intermittent signs of muscle weakness.  This can be easily treated with daily potassium dosing.  This breed also has a genetic lipid disorder (fat metabolism) and a genetic predisposition to diabetes, which can be treated with a low fat diet for life.

Talk to a Veterinarian for advice and information about cat breeds and inherited cat disorders.