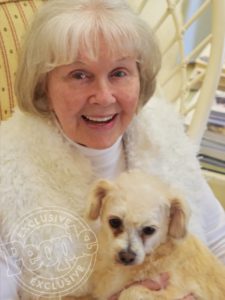 Doris Day celebrated her 92nd birthday with her beloved dog Squirrely.  She is still going strong and looking much younger than her 92 years. The actress and songstress said in the past to PEOPLE magazine, ‘I’m not really fond of birthdays anymore. Age is just a number. How you feel and live your life is more important’. But again this year, the Doris Day Animal Foundation team put on another big celebration.

You can join in the celebrations by signing her birthday card at the end of this article.

Long before it was fashionable to have a cause or show compassion, Doris was protecting and defending the animals and the people who loved them.

Although very down-to-earth and accessible as a movie star, Doris did once use her superstar status to pull rank to protect the animals.  That was in 1956. While in Morocco filming Hitchcock’s “The Man Who Knew Too Much” with fellow animal lover Jimmy Stewart, she surprised everyone and said she wouldn’t work unless the emaciated animals on or near the set received proper care. Responding to Doris’s concerns, the production company promptly set up a feeding station for the goats, lambs, horses, cows, dogs, cats, burros and other animals.  Doris, of course, supervised the care and feeding and was happy with the results and finished the movie. 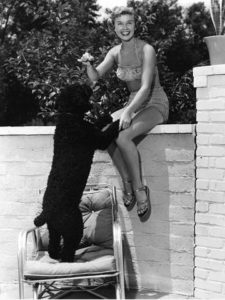 Doris started her own non-profit, the Doris Day Pet Foundation, in the late 1970s so she could focus on the issue that meant the most to her – finding homes for the too many animals who were being destroyed simply because there weren’t enough good homes.  Soon, she was fostering animals at her house, leasing space for kennels and had a big staff of volunteers to help her find homes for the increasing numbers of animals she encountered.  Late at night, it was not uncommon to see people actually dropping animals over Doris’s front gate or property walls.

I am so grateful and honoured that fans and friends come from all over the world to help support the precious four-leggers.  Doris Day celebrated her 92nd birthday

She formed another non-profit organization, the Doris Day Animal League, and that organization would deal with the big legislative issues directly with the President, Congress and elected officials on virtually every level.  Recognizing the power of the voter with elected officials, the Doris Day Animal League became one of the most-powerful forces on Capitol Hill for the sake of the animals, responsible for legislation for everything from limiting testing for cosmetics on animals to humane treatment of farm animals to tax penalties for animals who were not spayed or neutered.

The next step was to convert the Pet Foundation to the Doris Day Animal Foundation,  another non-profit.  This time, though, there had to be less focus on finding homes for individual animals.  Instead, Doris would help other non-profits and people in need to care for their animals.  That included everything from the pioneering “Spay Day USA” program she created almost 17 years ago and has been responsible for spaying and neutering over one-and-a-half-million cats and dogs, to providing grants for everything from humane education in schools to senior citizen funds to help them pay for their animals’ vet care and food.

Doris moved to Carmel, California in 1981. Doris began to shape the city into the dog-friendly mecca it is today.  She purchased a hotel where dogs and their people were both welcome, a leading-edge concept in 1985.

Nowdays, Doris Day prefers to stay out of the spotlight, but is in no way the recluse that the tabloids would make her out to be. There is a steady stream of friends who visit her at her home in Carmel.  She tends to the affairs of the Doris Day Animal Foundation, which continues to keep her very busy.

Doris’s only regret is that there are not more hours in the day to help the animals.

You can sign a birthday card for Doris Day here.

Biography written in 2008 by Allen Pollock for www.dorisdaytribute.com. Updated by Bob Bashara.