Poppy, Buddy and Toby are more than companion animals for Di Ridge, they are 3 working dogs who help Di and Phillip Ridge run “Jandra”, a 100,000-acre sheep station near Bourke in New South Wales.

Everyone has their job to do, but who really is the boss?

Who’s the Boss? Did you always have working dogs when you were growing up?

Di: Yes we did, dad always had a couple of old faithfuls and then a pup every 2 to 3 years. Something always happens to the older dogs so you always need a younger one coming along and learning. He would have no more than three dogs at a time. You always need the older dog to teach the younger ones, especially in the yards.

Who’s the Boss? Tell us about your 3 working dogs: Poppy, Toby and Buddy. 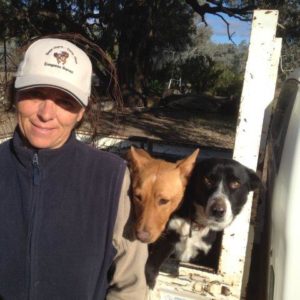 Di Ridge with Buddy and Poppy

Di: Poppy is a 4 year old Border Collie bitch, who is about to have pups, as usual just before we start the busiest time of the year – shearing! She is a good all-rounder but her speciality would be paddock work. She is a very soft worker, quiet and not too forceful in the paddock. Just works quietly behind the sheep moving them forward. We have very large distances so we keep the dogs on the motorbike for as long as possible because you don’t want them worn out when you really need to get to through a difficult spot into yard or through gates etc.

Toby is about 8 – 9 year old Red & Tan Kelpie. My boys get very frustrated with him as he is only a yard dog and will only work for me if they yell at him he just goes home. Toby and I have over the years pushed many thousands of sheep up to be drafted. Toby is a bit dopey, he only has learnt to jump into the Ute in the last couple of years, and he just doesn’t get it and not very springy. This also leads the boys to great frustrations with him, but he and I get on just fine!

Buddy is a cream Kelpie 2 ½ years old. He belongs to Richard our eldest son. He was an orphan and there were 7 in the litter. Buddy came from Wagga Wagga via Sydney, Coonamble to Bourke in a road train. I think he had Dog ADHD and although is now over 2 years old, he still loves to chase birds! With shearing coming up he will be a very different dog by the end so he just needs to be watched 24/7 as he is so busy. Now getting a bit older and slowing down, he will now stop when the work is done. Before he would be just working the sheep in the back yard for no reason just because he could!

Who’s the Boss? Job title and job description are really important to city people. What is the JD for your dogs? 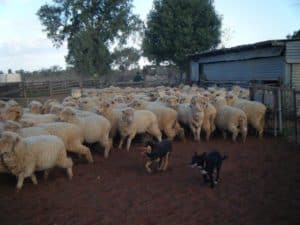 Di Ridge runs a sheep station with her 3 working dogs.

Di: We have 3 main times of the year for sheep work. August is shearing time, at home which goes for 3 weeks and 8000+ sheep come into the shearing shed yards and some may have to be drafted, which means they are divided up so they go up a laneway (known as a race) and at the end is a gate where you let them go in three different directions up to 4 times. We start to muster (move the sheep) with help from the dogs through the paddock closer to the yards to gather them together 2-3 weeks before shearing – starting in the very back paddocks and move them all forward till they are in the yards, then it may take the same to get them back to their paddock again. Sort of like a circle they come in one way and then head out the other way.

November is lamb marking time and this is a very busy time when all the sheep have to be mustered. The dogs help keep the sheep together as they tend to wander. The dogs round the sheep back into the mob and bring them to the nearest yard, which are scattered around the place. You can have up to 6 people working – 2 mustering and 4 in the yards.

Then crutching, which is shearing or removing the wool from around the sheep’s face so it can see, and also to remove the wool from the bottom area, as it can get dirty (urine stains) if left longer, and this can lead to fly strike or maggots eating into the sheep skin. We also spray to keep the flys away in February/ March, depending on the season. This is similar to shearing where all the sheep have to come through one set of yards. At this time we also wean the lambs and separate the ewes from the wethers.

Who’s the Boss? Who is the top dog at “Jandra”?

Di: It would have to be a close call between Toby and Poppy. Toby is the dominant male dog mainly because of his age. He is a barking dog and quite forceful. He likes to bark orders at the back to move the sheep forward. He rides a bike with me when we are getting sheep into the yards. On otherhand, Poppy is the best all-rounder. She is probably the most intelligent and reliable of the three dogs. I’d say probably she is the top dog. Her skills are the best. We are still waiting for Poppy to have puppies!

Buddy likes to be put to good use and he is keen to please. My son, Richard, will be home for some of the shearing and take Buddy mustering with him on the motorbike.

Who’s the Boss? What are your tips for city pet owners to keep their ‘working’ breed dog happy?

Di: Working dogs learn from each other and work well as a team in the yards. So sometimes we will have all three working together, which can be a bit hectic and also good if the sheep are not co-operating and/or the dogs keep each other going when they are getting tired. My tips are: teach your dog how to get along and work as a team with other dogs and with their human; and be consistent with dog commands. We use 7 commands including ‘hear hear hear’ said quickly when I want them at my feet working back through the mob with me, ‘good boy’ when they have done a good job; and ‘that will do now’ when it’s nearly time to go home and we are all exhausted!