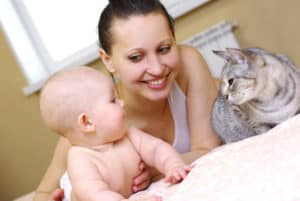 Children who grow up with cats can have a reduced risk of allergic sensitisation. Photo: Timofeyer Alexander/Shutterstock.com

Ehrlich uncovers the hot topics on the Internet about cats and babies -including allergies, toxoplasmosis and cats in the crib. It’s time for cat and babies myth busting!

Ehrlich says in her many years of experience as a feline behaviour consultant, she has actually heard from clients that their doctors have advised them to give up their cats when bringing home a new baby.  When pressed for reasons they have generally received comments about ‘added responsibility’ and ‘possible allergies, ‘despite such concerns being completely unfounded.

Cats and babies myth busting: ‘Cat will give you Toxoplasmosis’

Doctors are still telling their pregnant patients not to scoop the litter box. It is highly unlikely that your cat will give you toxoplasmosis. According to the Center for Disease Control and Prevention (2013), ‘people are more likely to get it from eating raw meat or from gardening.’ According to the Humane Society of the United States (HSUS), it is ‘difficult for cats to transmit toxoplasmosis directly to their care givers.’  The HSUS states that there are several factors that contribute to keeping the chance of such transmission low:

Cats and babies myth busting: ‘Keep the cat away from the crib’

Sometimes people are convinced a can suffocate a baby by lying across his or her mouth.  Ehrlich says ‘In my 28 years’ experience – an in the experience of every behaviourist and veterinarian I have ever spoken with about this – it has not happened.  Cats do not dislike babies but often seem to sense vulnerability and are instinctively gentle with them.’

Ehrlich adds – declawing is not necessary.  All pet owners need to do is make sure they take their cat to the veterinarian for regular health checks, and keep her up-to-date on any flea or deworming treatments if necessary.

From the child’s perspective, caring for a pet means learning about responsibility.  It means learning empathy and compassion.  The child also has a companion, someone non-human to love.  It is a win-win.

This article (It’s a good thing. Jane Erhlich reports on some of the common perceptions and misperceptions surrounding cats, babies, and children, and highlights some of the many reasons why growing up with a pet cat is beneficial to everyone) was first published in BARKS from the Guild, the official trade publication of the Pet Professional Guild, on July/2016 (pages 21-24).

Jane Ehrlich is an accredited feline behaviourist with over 27 years’ experience.  She spent 18 years volunteering with the RSPCA in both clinical and behaviour work and has her own consulting business, Cattitude Feline Behaviour.